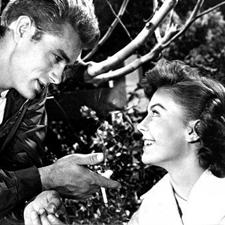 Yesterday, walking by the street in a windy day, I detected that the streets were full of shops with lightings and non stop carols (is it me alone or others also get their brains drilled with them?). When I reached the office, my email Inbox was full of online Christmas and a flood of bombons and perfumes advertisements filled me when, at night, I sat to watch TV.

There is no doubt … it’s Christmas.

– Hey … I said to my partner, who was relaxing on the sofa while watching, intravenous, Christmas adverts : what do you think about Christmas?

– What to say, what do you want me to think about Christmas?

– It’s only that … as time goes on, I don’t believe in the typical soup for Christmas or the Christmas meals with people that I would never have coffee with. I don’t believe in the good vibes imposed by the dates, neither in the feeling of happiness during this time of year. Perhaps is that I’m a rebel without a cause (as James Dean) and that I can not stand impositions …

A look enigmatic escrutaba me, as to where to preguntándose Quero ir ended up with this discourse (according to the) the entire etéreo. As the majority of the times, not none I arrived at conclusions. Seguramente it because ESAS time to pray for hours of neurons mysterious dream.

This morning, in exchange, I’ve collision with a video in which the networks change has done me the Opinion. The funky and contagious Roll, Do truth sea which is a good period for sea reflect on life, make balance, and dar ejemplo reconciliarse one with yourself. Well that the Christmas celebramos Because dijó How James Dean “-something Habra Because they make.”

External communication for a property developer